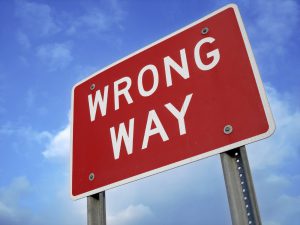 Have you ever been driving down a one-way street when you realize there is another car headed at you? You immediately think, “Great, I turned the wrong way down a one-way.” Or you might think, “Look at this idiot going the wrong way.” At this point, it doesn’t matter who is right or who is wrong. What matters is how both parties react to the situation. From inside your extended cab diesel pickup truck you decide to slow down, despite confirming you are going the right way. However, the wrong way Miata has a mighty big ego and isn’t slowing, convinced you are the offender. By the time you think to yourself how it is possible such a large human being can fit inside such a small car, it’s too late. They’re two feet from your bumper and honking at you to back it up.

This isn’t that different from many of the stories you hear from pilots who have flown into and out of uncontrolled airports. No matter what part of the country you’ve been to, there’s always that airport. The so-called “hornet’s nest” where you earn your stripes in see-and-avoid.

Uncontrolled airports do not have to be stressful when more than two aircraft are in the pattern. Patience, communication, eyes outside, and flying a normal traffic pattern will resolve nearly all potential conflicts. “Nearly all” because, no matter what, there will always be that one pilot who doesn’t seem to care.

It is important to exercise patience when approaching or departing an uncontrolled airport. Be methodical about when and how you communicate your intentions, how you enter or exit the pattern, and how you adapt to existing traffic. Know when to slow the aircraft down as you reach approach 10NM out, 5NM out, and enter the pattern.

Know when to stay put at the hold short line when it doesn’t look like you can squeeze out between traffic. Slowing to downwind speed before you enter the pattern, waiting 90 seconds before attempting to takeoff, or extending your downwind for a slower aircraft are small sacrifices you can make towards a safe and stress-free outcome.

Communication goes a long way when it is clear, concise, and deliberate. Remember that aircraft can still legally operate without a two-way radio at uncontrolled airports, albeit rare. The AIM recommends arriving aircraft establish communications no later than 10NM from the airport and again at 5NM out. With all the numbers we need to remember, this is the simplest math you’ll probably do. Keep your communication going when entering the pattern, within the pattern, and do not forget during surface movements! Many uncontrolled airports have complex taxiways and intersecting runways. Remain alert during surface movements and treat all runways as active even if the winds are clearly favoring just one. The very same goes for departing an airport, but obviously in reverse. While it’s not always necessary to monitor and communicate up to 10NM away, keep an open ear for incoming traffic. Lastly, keep your position reports simple; avoid adding a lot of slang or local area knowledge such as “turning over Hank’s Hot Dog Stand”.

The final, and most important, practice for operating at uncontrolled airports is something you’ve most likely heard before: see-and-avoid. Spotting an aircraft amongst the underlying terrain is not always the easiest thing to do, but combine see-and-avoid with good communication and you have prevented just about every potential conflict. Accomplish complex tasks and checklists before entering the pattern or surface movements. Keep your eyes out and look left and right, not just in the direction of your turns or where you want to be. 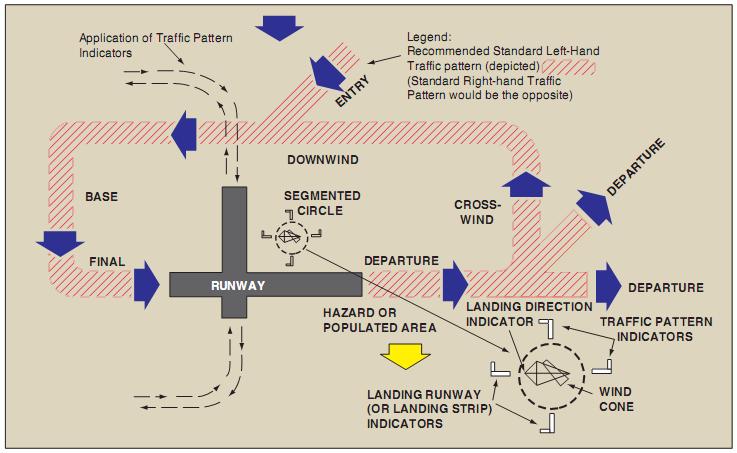 It’s no mistake that traffic patterns are simple and there is a published standard to them. The only difference one should look for is whether the pattern is left or right traffic. Yet, given the chance, some pilots tend to add their own little flare (pun intended) to how they enter, exit, or fly their patterns. Please refrain from this. The traffic pattern standard is a universal language amongst pilots and throwing one’s own slang into the dialect quickly causes confusion. Exercise patience and enter the pattern properly; even if it involves an entire four extra minutes of positioning your aircraft to enter the downwind.

Patience, communication, see-and-avoid, and standard traffic patterns create a strong foundation aiding everyone in avoiding stress and, most importantly, collisions at uncontrolled airports. All of this hopefully sounds very rudimentary and boring, but it deserves the reminder. Just like the “ONE WAY” traffic signs should have been obvious to that wrong way driver. In closing, flaring tempers and bending metal are never a good time. If all else fails and you find yourself with just these options remaining, know when to call it a day and leave. Any excuse to leave the pattern is a good excuse if it helps in maintaining the integrity of your aircraft and your circulatory system. Let the other pilot “win”, because in the end, they probably aren’t aware they have a medal draped around their neck with “World’s Dumbest Pilot” embossed on it.